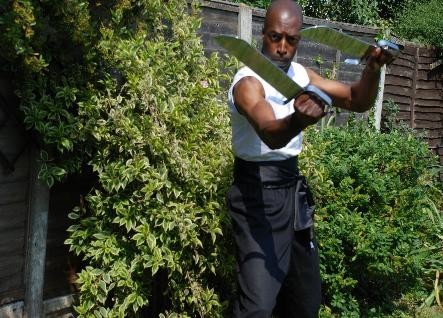 "I would like to take this opportunity to sincerely thank Master Paul Whitrod for teaching me the Chow Gar Hakka Southern Praying Mantis Kung fu System." Sifu Franklyn.

Sifu Franklyn's training in Martial Arts started in 1978 with Wado Ryu Karate under Sensei Yoshi Shinohara, where he reached Brown Belt. In 1982 he wanted to broaden his martial art skills, and try Kung Fu, and attended Sifu Tony Leung's Temple School, where he studied both Hung Gar Kung Fu and Steel Wire Mantis.

In 1989 Sifu Whitrod, asked him to teach the Chow Gar Hakka Southern Praying Mantis Kung Fu. Since then he has continued to teach in the London and Essex areas. It is said that the mark of a Sifu's ability and skill should not be judged on his or her abilities, but on the skills, ability and aptitude of his or her students.

Sifu Franklyn has been studying and practicing Chow Gar Hakka Southern Praying Mantis Kung Fu for well over 25yrs, and has demonstrated this unique fighting system, not only in the UK at such events as the Chinese New Year celebrations in Chinatown, but also abroad on numerous occasions. He also appeared on London Weekend Television's lunchtime news programme demonstrating this unique style of kung fu. More recently in September 2009 he was filmed and interviewed by the BBC following his school's demonstration at an international arts festival in the Royal Festival Hall, Southbank, Central London for a future television broadcast.

He is currently studying Toaist Tai Chi, and his future plans include studying the ancient Indian fighting art of Kalarippayatta, which is practiced in Kerala south India, and parts of Tamil Nadu.﻿